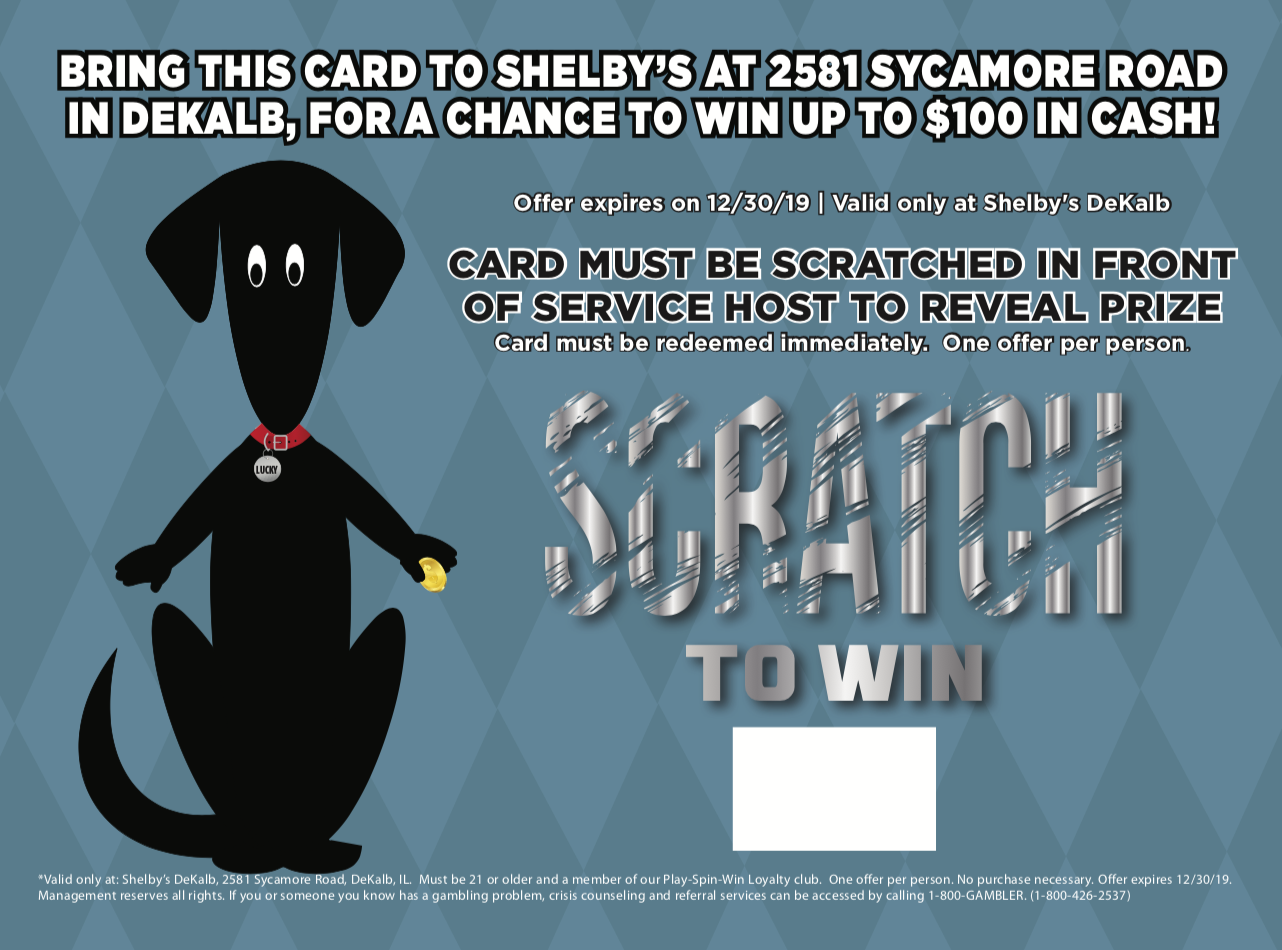 2. PROMOTION OVERVIEW: The Dekalb Scratch Card Mailer Promotion (the “Promotion”) is sponsored by participating Shelby’s locations.  These gaming cafes/restaurants operate under the ownership and management of Laredo Hospitality Management, LLC, with video gaming provided by Illinois Gaming Investors and by Gold Rush Amusements, Inc. (“Gold Rush”) (“Sponsors”). The Promotion will be available only at the listed participating locations in the state of Illinois. The participating location will allow guests to redeem their Mailer that is sent to the Dekalb area.

3. ELIGIBILITY: The promotion is open to all guests who are twenty-one (21) years of age or older at the time of entry and a member of the PlaySpinWin loyalty program*. No purchase necessary. Officers, directors, managers, and employees of Shelby’s Place & Stella’s Place, Gold Rush, and each of their respective parents, subsidiaries, affiliates, and related companies, as well as immediate family members and/or those living in the same household of each such person, and any others engaged in the development, production, execution or distribution of this giveaway, are not eligible to participate.

4. PARTICIPATION: To participate, eligible guests may visit one of the participating locations listed below, surrender the original Mailer that was sent to households in the Dekalb area, be a member of the PlaySpinWin program, and provide an email address to the guest host.  Limited to one Mailer redemption per patron, across all participating locations throughout the entire promotion at Shelby’s in Dekalb.

5.PROMOTION DATES: Monday, November 25, 2019 through Monday, December 30, 2019 during business hours for the respective location, or while supplies last.

6. WINNERS: Each potentially winning Scratch Card contains a prize message hidden underneath the silver coating of the Prize Box.  The prizes and the number of cards printed with each prize are set forth in the Dekalb Mailer Prize Table, below.

7. CONDITIONS: Entries are nontransferable. No copies or reproductions allowed. By participating, each Participating Eligible Entrant agrees: (a) to abide by these Official Rules and decisions of Sponsor, which shall be final and binding in all respects relating to this Promotion; (b) to release, discharge and hold harmless Sponsor and affiliated agencies or entities working on this Promotion, and each of their respective parents, affiliates, subsidiaries, and advertising and promotion agencies, and the respective officers, directors, shareholders, employees, agents and representatives of the forgoing (collectively, “Released Parties”) from any and all injuries, liability, losses and damages of any kind to persons, including death, or property resulting, in whole or in part, directly or indirectly, from entrant’s participation in the Promotion or any Promotion-related activity or the acceptance, possession, use or misuse of any Prize; and (c) in the case of the daily drawings, the right to use such winner’s name, photograph, quote(s), and/or likeness for advertising, publicity and promotional purposes in any and all media, now or hereafter known, without limitation and without compensation other than the Prize awarded. By participating, entrant also agrees not to release any publicity or other materials on their own or through someone else regarding their participation in the Promotion without the prior consent of the Sponsor, which it may withhold in its sole discretion.

9. CONDITIONS: Any applicable taxes on Gifts/Prizes are the sole responsibility of the winners. Entries are availability or accessibility or miscommunications or failed computer, satellite, telephone or cable transmissions, lines, or technical failure or jumbled, scrambled, delayed, or misdirected transmissions or computer hardware or software malfunctions, failures or difficulties, or other errors or difficulties of any kind whether human, mechanical, electronic, computer, network, typographical, printing or otherwise relating to or in connection with the Promotion, including, without limitation, errors or difficulties which may occur in connection with the administration of the Promotion, the notification of winners, or in any Promotion related materials. No more than the advertised number of Prizes will be awarded. The odds of winning are dependent upon the number of entrants. Released Parties are also not responsible for any incorrect or inaccurate information, whether caused by site users, tampering, hacking, or by any equipment or programming associated with or utilized in the Promotion. Released Parties are not responsible for injury or damage to any person’s computer related to or resulting from participating in this Promotion. Persons who act in an unsportsmanlike or disruptive manner or who are in violation of these Official Rules, as solely determined by Sponsor, will be disqualified and all associated entries will be void. Sponsor reserves the right at its sole discretion to suspend, modify or terminate the Promotion (or portion thereof) for any or no reason, including if Sponsor determines that any portion of the Promotion is compromised for any reason, and, if terminated, at Sponsor’s discretion, Sponsor may select the potential winner(s) for the drawing(s) at issue from among all non-suspect, eligible entries received for the applicable drawing(s) prior to action taken. CAUTION: ANY ATTEMPT TO DELIBERATELY UNDERMINE THE LEGITIMATE OPERATION OF THE PROMOTION MAY BE IN VIOLATION OF CRIMINAL AND CIVIL LAWS AND SHOULD SUCH AN ATTEMPT BE MADE, SPONSOR RESERVES THE RIGHT TO SEEK ANY AND ALL REMEDIES AVAILABLE FROM ANY SUCH INDIVIDUAL TO THE FULLEST EXTENT OF THE LAW.